We deserve nothing but the condemnation of God for the rebellion of Adam. But in Romans 8:1-2 we see that because of His grace God 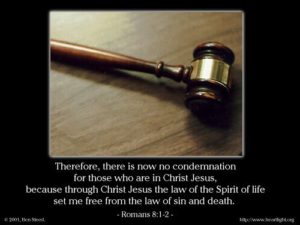 has declared those who have a relationship with Christ, manifested by their walk in the Spirit, righteous. Justification completely and forever releases every believer from sin’s bondage and its penalty of death. The Key to every aspect of salvation is in the simple but infinitely profound phrase “In Christ Jesus” Being a Christian is not simply being outwardly identified with Christ but being part of Christ, not simply of being united with Him but united IN Him. The idea of being “in Christ” actually makes us apart of Him in ways that are unfathomable to us now. Those who believe in Jesus are delivered from the condemnation by submitting themselves to a higher law, that being the law of the Spirit of God that dwells within us. Obedience to God through the Law cannot save a person, but true salvation will always produce true obedience. The freedom that Christ gives is complete and permanent deliverance from sin’s power and penalty. It is the awareness of this present glorious liberty and freedom that is one of the greatest spiritual forces that can ever be unloosed in the life of a believer.