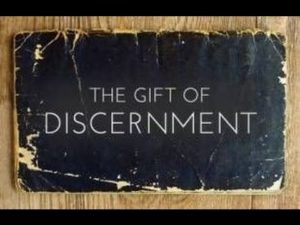 An important gift for the protection of the church is that of discernment. We live in a day and age when this gift is more important than ever. All Christians should judge carefully what they hear and read and “not believe every spirit, but test the spirits to see whether they are from God” (I John 4:1). Yet more and more the church is displaying a lack of discernment. Some ideas that are given as scriptural and that on the surface seem scriptural actually are clever counterfeits that would deceive most believers. The gift is especially valuable in the church because of this. Discernment is not the ability to tell the difference between right and wrong, it is the ability to see the difference between almost right and right! When Christianity is persecuted, counterfeit teach3ers usually are scarce, because the price for being identified with the gospel is too high, they are much more likely to appear in times and in places where Christianity is considered respectable or at least is tolerated. God gives some insight to expose imitations and deceptions that most Christians would take as genuine. Today, we live in a world that tolerates all teaching, it is so very important to listen with a discerning ear, and evaluate everything you hear in light of the teaching of the Word of God. In order to do that, you must have a basic understanding of God’s Word yourself. At the same time, if you have this gift you must not allow it to deteriorate into a critical, proud and self-righteous spirit. It must be used to protect God’s people, and to give direction to the body.