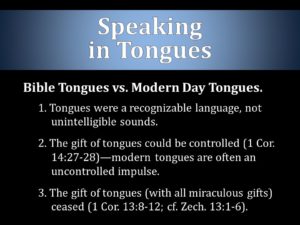 Today, tongues are often viewed as an uncontrollable impulse, but the reality according to 1 Corinthians 14:27-28 they could be controlled, This section gives four regulations for the use of tongues:
1. Only two or three people should speak at one service – Often in services there are multiple people speaking
2. They should speak in turn – Often we see multiple people speaking at the same time.
3. What they say should be interpreted – The implication is that one person speaks, someone interprets the message, and then another person can speak.
4. If no one has the ability of interpret, people should not speak.  – This indicates that the gift of interpretation is not a spontaneous gift either, but people will know that they have the gift.
As we deal with the confusion that the current tongues movement brings to our culture and world, we see that according to this passage that the guidelines are cear. The gift was not given to the church so that we would know that we have received the gift of the Spirit. Rather , tongues were given to convince the unbelieving Jews that there was going to come a judgment upon the, and that the message that was being sent to warn them was this gift. It is important for us to understand that the most important thing we do in the church is speak the truth in a way that brings growth, edification, and challenge to the people present. Don’t forget to serve the Lord this Sunday (and every day).