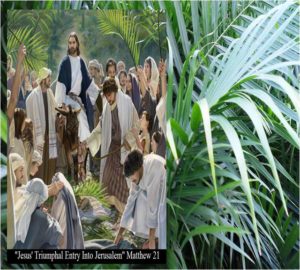 Matthew 21:1-11 portrays the most significant coronation the world has yet to see. Jesus presented himself to the nation as the King of kings, and he was affirmed as King, in a sense, inaugurated into his kingship. But the ceremony provided no pomp, no splendor, and a nondescript sort of pageantry. Traditionally, this coronation has been called Jesus’ triumphal entry into Jerusalem. It was his last major public appearance before HIs crucifixion and was an extremely important event in His Divine ministry on earth. This is an event that is frequently dramatized but seldom studies carefully or understood for its true significance. Jesus came to be a King, but not just any king, He came to be the King of kings! He presents Himself to the people who were gathered in Jerusalem for Passover to acknowledge that He was their king. At that same moment, history tells us that Pilate entered Jerusalem from the East, with all the pomp that the Roman Legions would allow. Later, when Pilate would ask Jesus, “Are you a king?” Jesus says, “That is why I have come, but my kingdom is not of this world, for if my kingdom was of this world then my people would fight that I would not be delivered to the Jews!” We must understand that Jesus first coming is to establish His Kingdom in the hearts and minds of people. It is not a visible reign, it is a reign in the lives of those who follow Him. We must come to Jesus and accept His rule in our lives, and bow before Him as Lord of lords.