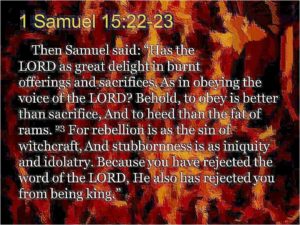 1 Samuel 15 we read the account of Saul being rejected as King. He is commissioned to be God’s agent of judgment upon the Amalekites and while he does go to war with the Amalekites, He does not carry out the directives of God. As a result Saul is rejected as the King of Israel. Samuel in confronting Saul says, “Rebellion is like the sin of witchcraft” (v23) . Rebellion divides, and destroys, and yet we see this manifested not only in America but globally. Rebellion is not just manifested in total rebellion, but is seen in the partial obedience of Saul. We must understand that partial obedience is still disobedience! Saul’s sin of rebellion not only affected his status before the Lord, but it changed the role of his son, Jonathan, and created disunity in Israel. We must understand that the battle with rebellion is not an ancient battle that we do not face, but is a temptation that we battle every day. The key to overcoming is learning to be obedient to the Word of God.