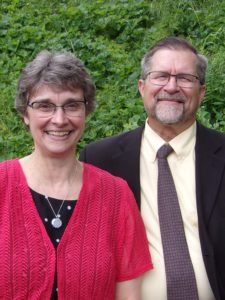 “What a blessing it is for my wife and I to join with this wonderful group of believers to assist in personal growth and development. I look forward to helping this body of believers to reach out to this community to impact them for the glory of God.”

Pastor Jamison is a 1979 graduate of Cedarville College with a BA in Pastoral Studies, and a 1984 Graduate of Grand Rapids Baptist Seminary with a Master of Divinity in Pastoral Studies. While going to seminary he served as a Youth Pastor for two years, and he has served as pastor of two churches in Ohio; The first, a church plant in the greater Cleveland area for 12 years, and the second in the Lima area for 19 years. While in Lima he also helped start a Bible Institute where he served as chief administrator, and Bible instructor for 9 years. In 2014 he was forced to step away from pastoral ministry due to some ongoing health issues and during that time joined the congregation of Millersburg while recovering.

In the Spring of 2016 Jim, having regained his health, felt led of the Lord to return to his passion of serving the Lord vocationally, so he and Kary began praying and waiting on the Lord to reveal what that would look like. In the process of time, the pastor of Millersburg Baptist Church was led to a new ministry, and it seemed to be a natural fit for both the Jamison’s and Millersburg Baptist Church to pursue the Lord’s direction in the midst of these circumstances. After much prayer and evaluating of the gifts and needs of the church, Jim and Kary accepted their new role as shepherd of this flock in December of 2016, Pastor Jamison has jokingly said that, “this was the longest job interview I ever had, almost three years!”

Pastor Jamison’s heart is to teach and instruct the body to understand the Word of God. He comes to Millersburg with a vast experience which includes: 31 years of pastoral ministry, administrator, biblical counseling, special speaking, and teaching in a Bible institute. His goal is to make the Word of God simple enough that all ages can understand it, but deep enough that all will be challenged to grow.

Jim and Kary Jamison have two grown sons, Seven grandchildren (two already with the Lord), two wonderful daughter-in- law, and a number of young families they have adopted along the trail of their ministry lives.