Moses’ mother took great risks to protect her son. Unfortunately, this woman was a slave among a very brutal people. The plan according t 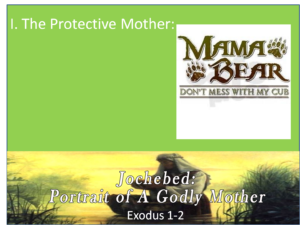 o Exodus 1:15-16, was to control the Hebrew people through controlling the male population. The problem for the Pharaoh (Exodus 1:17-22) is that the midwives did not obey his command and allowed boys to live and the nation of Israel continued to grow strong in spirit and in number. After Moses mother could no longer hide him and feared that death would come to her son, she placed him in the Nile and trusted God for his deliverance. Not only did God protect the child, called Moses, according to Exodus 2:7-9 Jochebed was given the privilege of being paid to raise him (What mother would not like that benefit!) Mothers have protected their children in many ways, some have protected them physically, keeping them from danger. Others have protected their children morally by teaching them right from wrong. Many times mothers have protected their children emotionally by keeping Them from things they knew would hurt them. But the greatest protection that a mother can provide for their children is to raise them in the nurture and admonition of the Lord (Ephesians 6:4), so that they will have within their hearts, to ability to make proper value judgements concerning their world, their circumstances and most importantly about the Lord. Mom’s take heart in your work and labor of love, knowing that your reward comes in time.