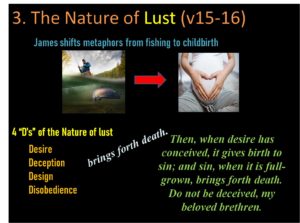 In James 1:15-16 there is a shift of metaphors from hunting and fishing to childbirth. “Lust is depicted as a mother conceiving and bearing a child, which is “sin” and whose ultimate destiny is “death”. Early in my ministry this was known as the “LSD” verse of the Bible. The Lord makes it clear here that sin is not an isolated act or even a series of isolated acts, but rather the result of a specific process.
That process can be seen in the 4 “D’s” of the nature of lust. It starts with “Desire” (lust) which begins with an emotion, feeling, or longing for something, that at first may be largely subconscious. Something we see or hear about suddenly grabs our attention and draws out a strong desire to have it or do it. Then we move to “Deception” (lust has conceived) This is more closely related to the mind than to the emotions. We think about a desired object, and our mind begins to rationalize a justification for getting it. That moves us to “Design”. When our plans start to be made to fulfill the emotional desire that we have rationalized and justified in our minds. This stage involves our will, or conscious decision to pursue the lust until it is satisfied. This ends with “Disobedience” If we allow the process to continue, the design inevitably produces disobedience to the Word of God.
It goes without saying that the earlier in this process we determine to resist, the greater the likelihood we will avoid the sin. The battle is fought primarily in the mind, and it is the truth of God’s Word which activates the conscience, and must be heard and not ignored. This is what David meant when he says in Psalm 119:11 “Your word I have hidden in my heart, that I might not sin against You.” Spending time in the Word of God will assist us as we attempt to break the hold of the 4 “D’s” of Temptation.